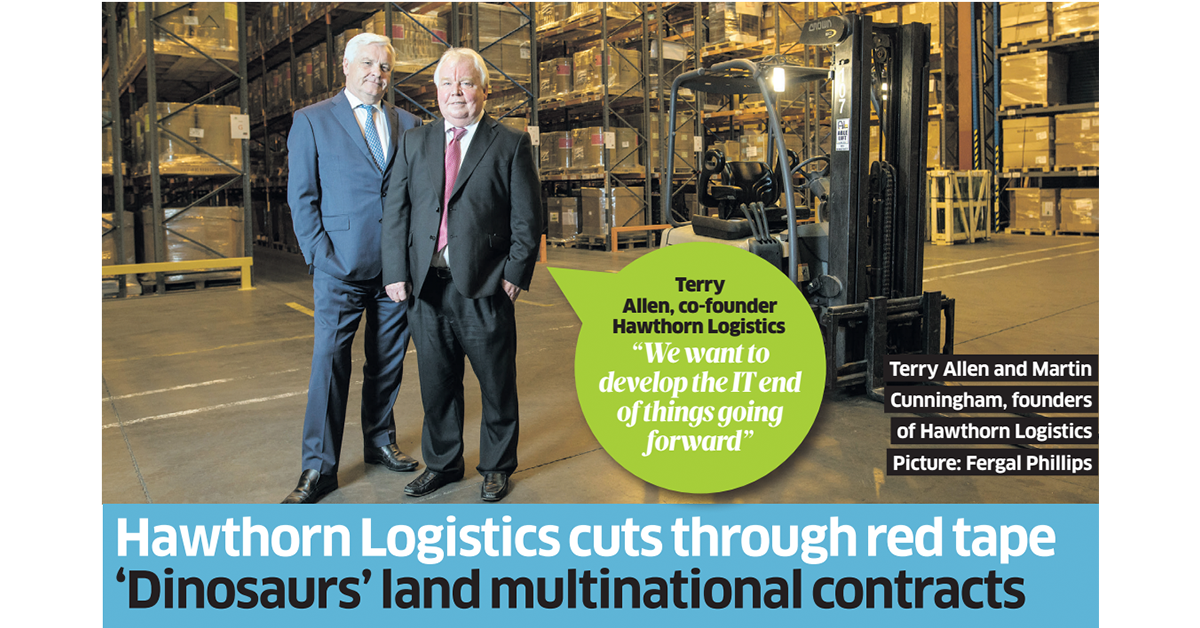 A personalised approach to customer service was the key to Hawthorn Logistics surviving the recession, and thriving after it. Terry Allen and Martin Cunningham had a wealth of experience between them when they started the Dublin-based company ten years ago.

“We’re both dinosaurs of the industry,” Allen said. “I was with Aer Lingus for 14 years before moving to MSAS, which later became DHL, while Martin was working in Britain through the 1970s before leaving for MSAS Singapore.”

It was in Singapore where the two met – Allen would travel there for business, and their conversations would inevitably turn to how they would do things if they ran their own logistics firm. “The transport industry has a lot of bureaucracy: multiple companies will take over from one another, transporting boxes across land, sea and air,” said Cunningham. “This makes the tracking of cargo quite complicated, needlessly so in our view. Eventually, we got to the point where we were saying if we don’t do this now, we’ll never do it. Although I think if we’d known what was coming with the economy, we might not have done it.”

In 2007 the pair teamed up to found Hawthorn Logistics, a transport company that promised to deliver cost-effective shipping while maintaining a personal element at its core.

“We have a personalised service that is tailored to each customer’s individual needs,” said Allen. “That has often meant one of us getting in the car and doing a delivery, or part of a delivery, ourselves.” For Cunningham, knowing what their customers didn’t want was the key to surviving the downturn. “We wanted to remove the red tape and overly bureaucratic systems that they might have been used to,” he said. “It was incredibly difficult, but we managed to navigate those choppy waters.”

In 2009 they teamed up with Seko Global Logistics, a multinational logistics provider based in the US, whose primary capability lies in IT solutions rather than transport. “They were equally as focused on growth through service as we were,” Allen said. “We became Seko Logistics Ireland, while remaining essentially as Hawthorn, taking complete ownership and maintaining autonomy.”

The deal allowed Hawthorn to secure contracts with large multinationals, and it now employs 30 staff. “Each of them has a number of clients that they work with from start to finish of the transportation. That reassures the client, as they know they have one person dealing with them, and that person knows exactly what’s going on,” said Allen.

Through the partnership with Seko, Allen and Cunningham have moved beyond transportation and into purchase order, warehouse and transport management. “We want to develop the IT side of things going forward,”Allen said. “Our supply chain is the most important thing right now for the growth of our clients. “As I said, we’re dinosaurs of the industry, so we need young people in now for the IT end of things. We’re learning from them, and they are helping us to grow the business.”

The firm was the winner of this year’s ‘best in technology’ award at an event organised by the Irish Logistics and Transport Group.